Let’s explore each of these capabilities!

As depicted in the screenshot below, individual accounts can enable the service by clicking Enable, optionally selecting EC2 or ECR container scanning options:

As soon as it’s enabled, any instance with a recent SSM Agent version, and a properly configured IAM Role, starts to automatically scan:

Pictured above is an “Unmanaged Instance”, which does not have a running SSM Agent or a properly configured IAM Role. This state (and other states) are not only visually depicted, to identify coverage gaps, but an event is emitted to EventBridge as well (more on this later!).

Compared to Amazon Inspector Classic, which relied on tags to specify in-scope instances, all instances are in-scope by default.

Similar to GuardDuty, Amazon Inspector supports the automatic enablement of scanning for new member accounts that are part of an Organization:

Both of these capabilities further support the identification of coverage gaps – by ensuring new accounts are enabled by default (and subsequently instances and ECR container scanning enabled automatically and accounts in which the feature is disabled are easily identified, as displayed above.

Compared to the previous version, in which individual accounts configured and emitted events, configuration and events can now be centrally administered and emitted.

An example of this would be the detection of subsequent vulnerabilities days apart:

The previous version of Inspector required a separate agent to be installed, which was installed either manually, bootstrapping, included in an image, or deployed via SSM, by the Inspector service. This version utilizes the SSM Agent, reducing the overall impact on system resources. 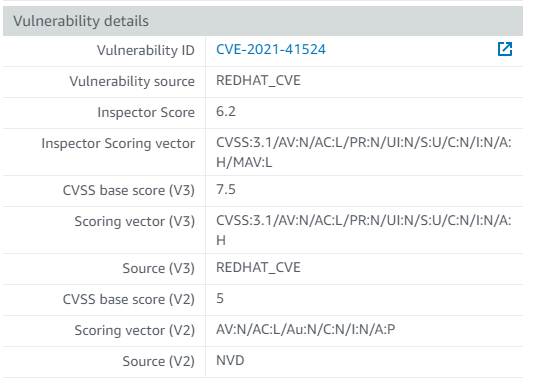 In the Previous Version of Inspector, the NVD/CVVS or Vendor Score was displayed.

Findings can be Suppressed

Finding can be suppressed using similar rule notation as Guard Duty to suppress findings that may not be relevant to your organization, for example, suppressing findings with an Inspector score less than or equal to 5 would be configured like this:

In the previous version, findings could not be suppressed.

Remediated findings are automatically closed when they are no longer detected. Example of this would be updating a vulnerable library or removing an excessively permissive Security Group grant. An example of this is below:

In the previous version, findings did not have a status.

Dashboard has been Redesigned

With the simplification of Amazon Inspector configuration (elimination of assessment targets, templates and schedules), and the addition of the new features described above and below the dashboard has been redesigned:

In addition to EC2 Scanning, ECR Stored Container Images can be Scanned

ECR Stored Container Images can be Scanned, with findings included in the same Dashboard and emitted to the EventBridge:

Available in All Commercial, GovCloud and China Regions

Finally, Inspector is available in All Commercial, GovCloud and China Regions whereas previously Inspector was available in _most_ regions and GovCloud, with some exceptions.

In Conclusion, the new Amazon Inspector offers significant advantages over the previous version of Inspector, eliminating complex configurations, adopting an opt-in by default approach to scanning and eliminating potential gaps in workload and image scanning.

We are looking forward to leveraging it within our organization, along with SecurityHub and EventBridge based integrations to automate common vulnerability identification, triaging, mitigation/remediation and reporting activities. One such example of that can be found here: https://aws.amazon.com/blogs/apn/sending-amazon-inspector-common-vulnerabilities-and-exposures-findings-to-the-servicenow-secops-module/