Another re:Invent keynote jam-packed with announcement after announcement…here’s what you may have missed 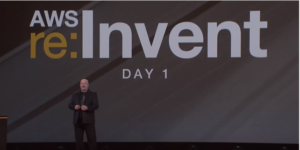 Amazon Web Services, the largest public cloud currently available, made more announcements in their two hour keynote at AWS re:Invent 2015 than they did in two days during last year’s re:Invent. If there was any question regarding this platform’s long-term potential, the investments made in these new products and markets should put all doubts to rest.

Another new feature focused on performance enhancements in the cloud is Kinesis Firehose, a tool that allows users to push data into the Amazon cloud through web apps, mobile apps and even telemetry systems.

In addition to Kinesis Firehose, Amazon is also rolling out Kinesis Analytics a service that allows users to perform time-series analytics over data that is streaming in real time. Developers will be able to execute pre-defined SQL statements as well as run custom queries.

Amazon announced new x1 instances capable of utilizing up to 2TB of RAM as well as smaller t2.nano instances.

These new instances will utilize Intel Haswell processors supporting up to 100 cores and the t2.nanos are built to be burstable, meaning they can quickly scale up resources as needed.

Additions to Amazon’s Lambda computing service include support for Python as well as support for AWS’ Virtual Private Cloud service.

Amazon Inspector draws on knowledge from 20 years of experience in the industry. It is a type of service that looks for and identifies security and compliance issues that could be affecting cloud users.

AWS announced the EC2 Container Registry, which is a new fully managed service for storing container images for various parts of applications.

With the growth in mobile apps, Amazon launched AWS Mobile Hub, which is a service for running, testing and monitoring both Android and iOS apps from the cloud.

Amazon now has released AWS Import/Export Snowball, which allows companies to order an AWS provided storage appliance that will be delivered on-site. This appliance can then be used to transfer large amounts of data into Amazon S3.

If you’re migrating to AWS from an existing environment you likely have purchased volume licenses for software that must be used on a server with a certain number of cores or sockets. Licenses for Windows SQL Server, Windows Server, SUSE Linux Enterprise Server and Oracle Database often have this requirement.

With AWS, Amazon wants to make sure you can continue to utilize these licenses and now offer EC2 Dedicated Hosts. This model allows you to allocate a dedicated server and then be able to launch one or more EC2 instances on the server itself. This helps businesses to stay within the confines of any existing software licenses.

Amazon CloudWatch monitors your AWS resources and cloud based applications. It can easily track various metrics and allow you to review them. Common metrics measured by CloudWatch include application performance, resource utilization and operational health.

With updated CloudWatch Dashboards you’re now able to build customized dashboards based on your unique needs. Each dashboard can have fully customized metrics along with text and images.

Amazon is even offering a variety of IoT starter kits that help you to get started with this exciting technology, whose goal is to literally connect the world.

AWS Key Management Service allows users to create and control encryption keys used to encrypt their data. Users can now create, enable, disable and rotate keys, but also now completely delete keys. By deleting a key, all data associated with that key becomes unrecoverable. You can also now schedule key deletion by scheduling a waiting period that is fully configurable.

AWS continues to cement themselves as the top provider of cloud solutions for organizations of all sizes. October was a busy month for AWS and we’re sure that the rest of the year will be no different. As we look forward to new announcements from AWS, we’re also interested to see how the ones made in October will change the cloud landscape.